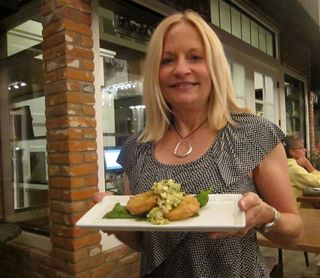 Sept. 2, 2015 – Just in, an email request from Leslie Thomas to update this article, written in 2010, because of changes that have transpired.

As you read it, keep in mind the following:

It is not known at this time whether or not the restaurant follows the original business model.

Please update the article on your website that mentions this. Joe is since divorced.”

Hot (in one sense), cold and for sure the best creme brulee that I have tasted in a long time turned up at Thomas Hill Organics Market Bistro & Wine Bar in Paso Robles. 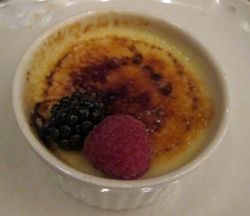 It was a jalapeno creme brulee, not as spicy as it sounds, but aromatic, creamy and so delicious that it almost outshone everything I ate.

Almost, because all the dishes were very good as well as interesting, not the same old trendy combinations. 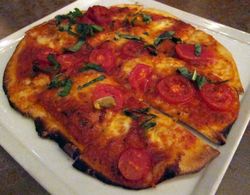 Located in the center of town, Thomas Hill Organics has its own farm, which ensures a constant supply of fruits and vegetables. There’s no distributor involved, so everything that comes into the restaurant is really fresh.

That’s why a thin crusted margherita pizza (above) was better than most. The tomatoes, fresh tomato sauce and basil on top were at their peak.

Owners Debbie and Joe Thomas get whatever they don’t grow themselves from local purveyors. That includes meats, seafood, bread and a good selection of local wines. 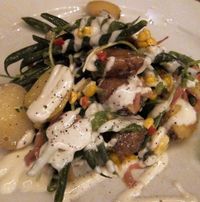 The menu changes to keep pace with what the farm produces. Another stand-out the night I was there was a salad (right) of fingerling potatoes and smoked trout with haricots verts, corn and watercress, a hazelnut vinaigrette and a drizzle of creme fraiche.

A deep red puree of beets, tahini and orange juice–odd but intriguing–came with a stack of pita. Debbie Thomas (at top) brought out an extra that was not on the menu, fried green tomatoes with chunky remoulade sauce. 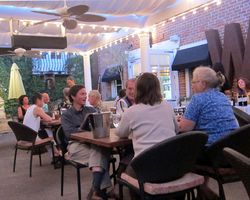 The restaurant has seating inside, but the place everyone wants to be is the courtyard, where there is live music at night.

I went there with Mira Advani Honeycutt, who owns Cabernet Cottage in Paso Robles, a place where winemakers stay and often the scene of parties involving the local wine crowd. 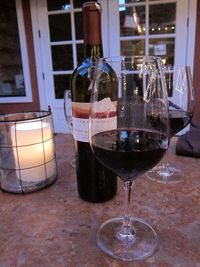 She brought the wine, a  Minassian-Young 2006 Cabernet Sauvignon from dry-farmed vineyards in Peachy Canyon, Paso Robles.

The next day, we drove through hilly vineyard and farming country to the Thomas Hill Organics farm.

Joe Thomas is a serious artist, at raising fruits and vegetables as well as painting them on canvas and on the logos for tee shirts sold at the restaurant. 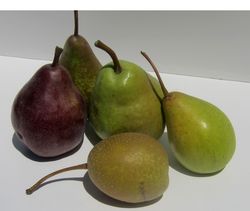 That day, he was working out an arrangement of pears that he would photograph and later paint.

Anyone who grows nine kinds of pomegranates has to take an unusual interest in farming, and Thomas seems to revel in it, even to discussing the heartbreaks philosophically. Rabbits ate his entire crop of green beans this year, and they also go for his chile pepper vines.

Thanks to his generosity, we came away with freshly picked apples, tiny Asian pears, plums, melons, cucumbers, chiles and tomatoes.  The heavily laden trees were dropping fruit on the ground, none of which could be used. Surprising that the farm supplies only the restaurant, when such a large crop cries out to be sold at farmers markets.

The restaurant does put out some produce for sale, and Thomas said that some goes to a Community Supported Agriculture project headquartered at a nearby winery. 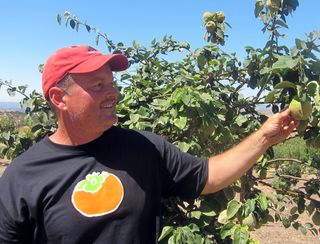 What’s coming into season next includes quince. Thomas, photographed with a quince tree and wearing a shirt with one of his logos, told how he cooks the fruit with red wine and spices down to a soft paste in a slow-cooker. That’s something to try when quince appears in markets this fall.